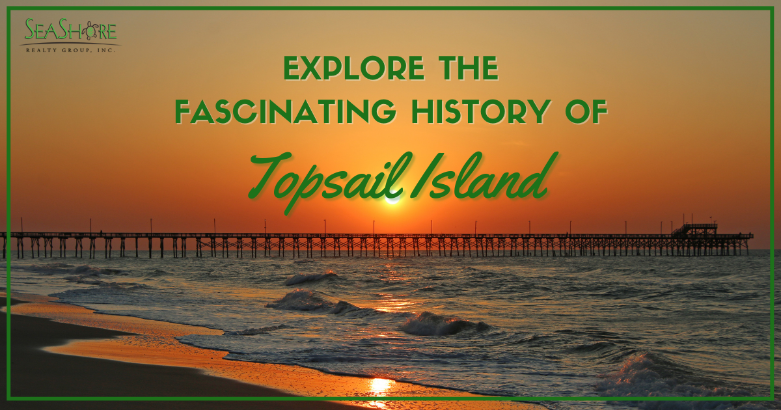 Topsail Island spans 26 miles long and is located on the Eastern coast of North Carolina between Wilmington and Jacksonville, and for quite some time, was a well-kept secret. Some people speculate that Topsail Island (pronounced Tops'l) got its name from pirates who would use the island as a hiding spot during the early 1600's and 1700's, however the sails of the ships were still able to be seen from the ocean... hence "Topsail." This sounds super cool and exciting, however it is generally agreed upon that the name Topsail Island originated from the New Topsail Inlet, which can be located on old navigational maps.

Before the start of World War II, Topsail Island was a hidden treasure, known mainly to the locals who visited by boat, which was the only way to access the island at the time. Locals would visit the island for a fun afternoon on the beach and treasure hunters were known to search the area for Blackbeard's treasure. The only structures at the time were a few shelters built in the early 1900's.

Once World War II began, the U.S. Army began utilizing the nearby Holly Ridge area and took over the island. They built several structures including roads, a floating bridge, and several buildings used for training purposes. When the war had concluded, the U.S. Navy took over and collaborated with John Hopkins University on a secret project called "Operation Bumblebee."

Operation Bumblebee was a program that ran from 1946-1948 and focused on developing guided missiles and during it's time on Topsail Island, over 200 missiles were tested from our beaches. Did you know you can visit the building where the missiles were assembled? It was built in 1946 and now serves as our local history museum! Learn more about it here. You can also check out a few of the towers used to track the missiles.

Neat fact: "The principle of the controlled ramjet engine (the main concept for today’s supersonic flight) was tested and proven on Topsail Island as a result of Operation Bumblebee." Source: http://missilesandmoremuseum.org/exhibits/operation-bumblebee/

When Operation Bumblebee ended in 1948, the military moved out and Topsail Island as we know it today sprang to life! The Town of Topsail Beach was officially named and incorporated in 1963.

See? There is so much to explore and learn about on Topsail Island and we hope you'll come and do so at one of our Topsail Island beach rentals! It's the perfect spot to relax, connect with friends and family, and have a great time. We'll "sea" you soon! Come CREATE YOUR OWN HISTORY ON TOPSAIL.

Check Out Our Rentals